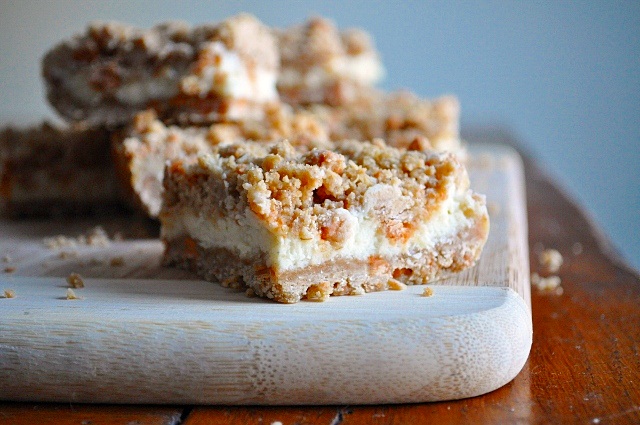 Oh my word.  These things are amazing.

Since I need to get back to "being good" when it comes to eating, I decided to make this dessert as one last over-indulgent thing to stuff my face with before getting back on track.  Actually I've spent the last 2 weeks eating anything and everything I want - that was my way of gearing up for the deprivation that was to come.  Unfortunately, doing this only added to the lbs I'm ultimately trying to get rid of.  But whatever....I enjoyed every single bite of every single bad thing I ate and I have no regrets!  I think it's indulging is just necessary sometimes.

This is yet another recipe I've had in my pile, and I've been meaning to make it for quite some time.  I wasn't sure if it would be too sweet, so I guess that's why I held off making it for so long.  It's probably just as well because these things were addicting and I couldn't get enough of them!  So, so good.  That's really all I can say.  My husband absolutely LOVED these, as they encompass all of his favorites - oatmeal, butterscotch and cheesecake.  I'm telling you, you gotta try these things! 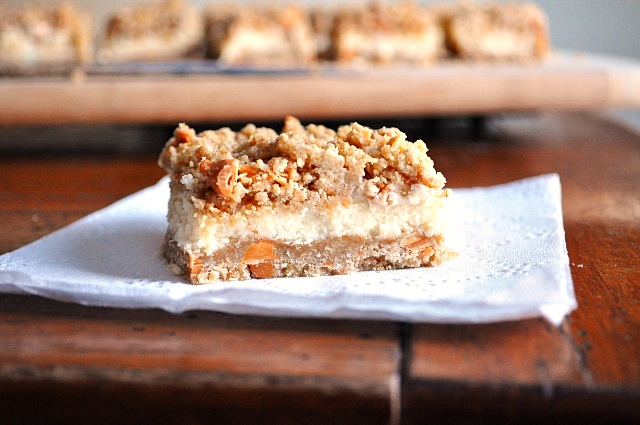 Preheat the oven to 350 degrees F and spray a 9x13 baking dish liberally with cooking spray.

In the bowl of a food processor add the brown sugar, flour, oats and pulse to combine. Add the 2 sticks of butter, cinnamon, salt and the butterscotch chips. Pulse until mixture forms clumps. Transfer the mixture to a large bowl. Press half of the mixture into the bottom of the prepared pan in an even layer and set aside the other half. Bake until slightly golden and set, about 12-14 minutes. Remove from the oven and cool completely.

Chill in refrigerator for at least 3 hours before cutting and serving.
Posted by Little B at Tuesday, January 08, 2013
Email ThisBlogThis!Share to TwitterShare to FacebookShare to Pinterest