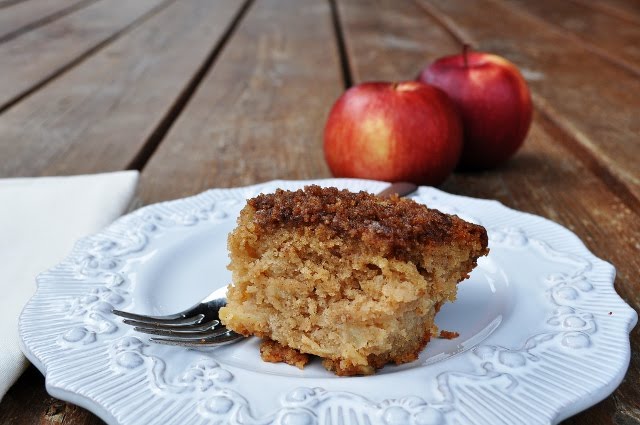 Every week I try to have at least one thing that is homemade for my son to take to school for a snack.  There are times that I am just out of ideas, and there are times when he decides that pretty much nothing sounds good.

One day I was going through all the recipes I've collected over the years to try and find something I hadn't tried before, and I came across a recipe for apple cinnamon coffee cake.  Since I had lots of apples on hand at the time & buttermilk (which is not something I always have on hand), I decided to give it a try.

Honestly, I don't know why I waited so long to try this recipe!  It is just bursting with cinnamon yumminess, and is so moist.  It is now my son’s favorite snack.  If I ask what I should make he ALWAYS suggests this.  In fact, one time his teacher got irritated with him because the whole time he eats this for snack he says "mmmmmm" and it became distracting to the class!!  It doesn't last more than two days in my house, less if we have company.  This is a must try.....
Apple Cinnamon Coffee Cake
Posted by Little B at Friday, March 23, 2012
Email ThisBlogThis!Share to TwitterShare to FacebookShare to Pinterest