Not Your Average Snicker Doodle 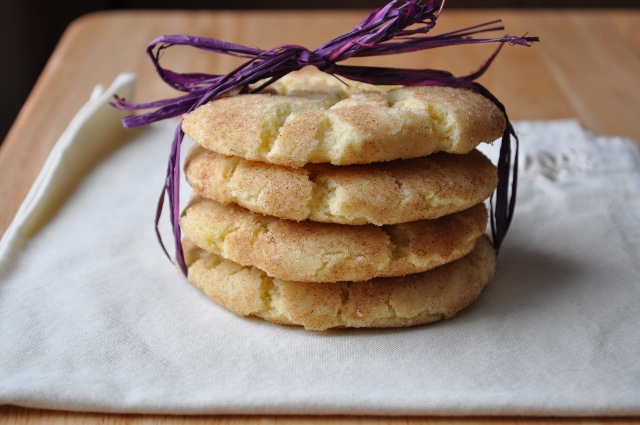 It's snowing (again) and we have to drive an hour and a half to go to a basketball tournament today.......blah.  I haven't been able to get a whole lot done this weekend, but I did manage to make these cookies.


This recipe comes from the kitchen where I used to work.  I have seen lots of recipes over the years for Snicker Doodles, but this one has one important ingredient in it which produces an outcome that I think sets it apart from all the others I’ve tasted - almond extract.  Once peanut allergies became a problem at the school we could no longer use the almond extract and that's when I realized how much of a difference it made in the flavor of the cookie.  Don't worry, if you are not a fan of almond extract - I promise that the cookie will not taste like it's in there.  Without it, Snicker Doodles just taste like a cinnamon coated sugar cookie.  The only way I can describe it is that the addition of the almond extract brings out the flavor of the cinnamon even more.  I can't put it into words, so you'll just have to try it for yourself - I promise you won’t be disappointed!


Cream shortening, sugar and eggs. Combine flour, cream of tartar, baking soda and salt. Add the flour mix to the creamed mixture, and add the almond and vanilla extracts and mix to combine. Scoop out dough and roll into balls (I use a size 40 scooper, which is about the size of a golf ball), then roll into the sugar/cinnamon mix. Place 2 inches apart on a cookie sheet sprayed with cooking spray. Bake at 350 for about 12-14 minutes. These cookies will not get brown all over, so be careful to not overcook!

Posted by Little B at Sunday, March 04, 2012
Email ThisBlogThis!Share to TwitterShare to FacebookShare to Pinterest