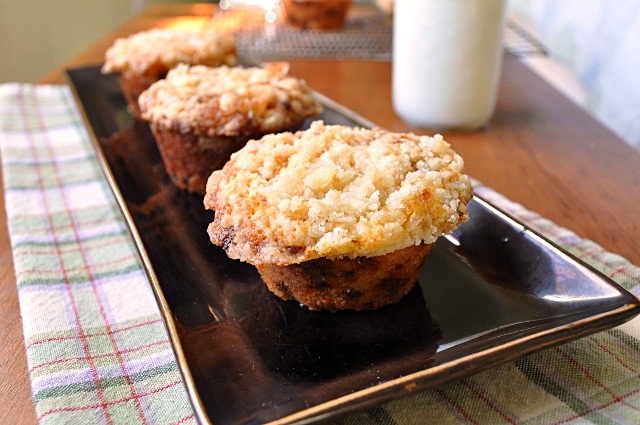 One day I was going through my cabinets to make a mental log of what I had, and what needed to be used up and I came across a bag of cinnamon chips.  I honestly I have no idea why I bought them to begin with...there must have been some recipe I had in mind to try but never got around to it!  So, with school snacks for my son in mind, I decided to make cinnamon chip muffins.

The first time I made these I did not think to put a topping on them, and I thought they turned out a little bland.  However, my son and husband liked them anyway so I figured I'd keep the recipe but next time add some kind of topping to make them a little more exciting.  I decided to go with a streusel topping, which worked out really well.  My family thought they were really good and gobbled them right up!  I might still play with the topping a little, but this recipe is a keeper for us.  NOTE:  If you exclude the cinnamon chips and topping, this muffin recipe is a great base for any filling you want to add. 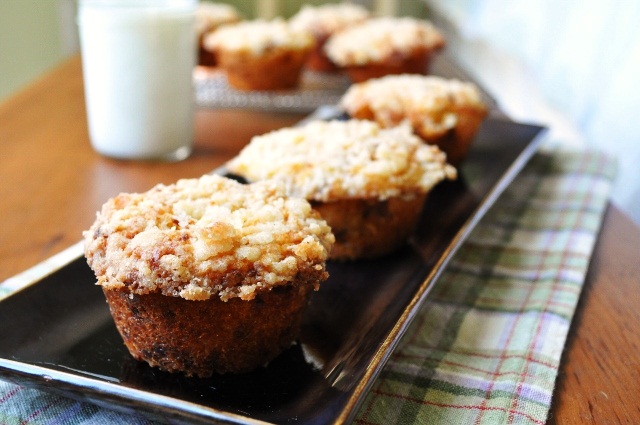 Streusel Topping:  Add 1/4 cup cold butter, ¼ cup flour and ½ cup sugar to the bowl of a food processor and pulse until it forms a fine crumb.

Preheat oven to 400, and spray muffin tin with cooking spray.  In a large bowl stir together flour, sugar, baking powder and salt, making a well in the center.  In a separate bowl, beat egg together with the milk, oil and vanilla.  Pour the egg mixture into the well of the flour mixture, and stir until just combined – do not over mix, batter will be lumpy.  Stir in cinnamon chips and divide batter equally into the muffin tins.  Top with the streusel topping and bake for 25 minutes, or until a toothpick comes out clean and muffins are golden brown.
Posted by Little B at Tuesday, April 24, 2012
Email ThisBlogThis!Share to TwitterShare to FacebookShare to Pinterest