Not Your Average Potato Salad 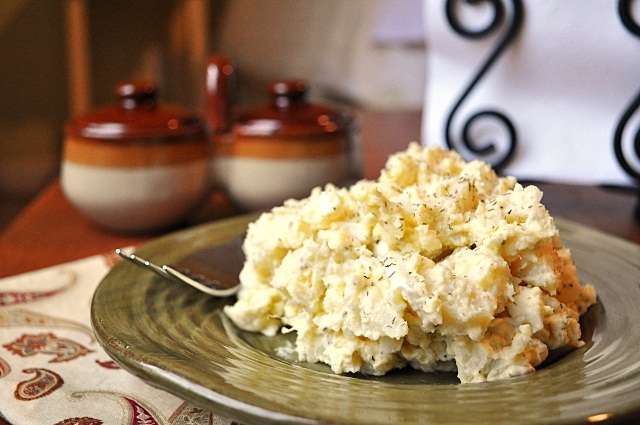 First off, let me start by saying that I have a strong aversion to mayonnaise.  I just don't like it, although I have become a little more tolerant of it in the last 10 years.  The first summer we lived in Vermont my husband wanted to have a cookout and really wanted me to make potato salad, which at the time was something I had never made, nor ate, because of the mayonnaise.  So he suggested putting it together with me so he could show me how he liked it.  The first step was to make a few hard boiled eggs.....huh???  Eggs?  Why would you put eggs in potato salad I asked?  His answer:  "That's how my mom made it and that's how I like it".  OK, but I thought it was weird.  As we put it together I was intrigued at the ingredients he was putting into it, but before he started adding the mayo I warned him that I would not eat it if it was going to be loaded with mayonnaise.  He assured me he doesn't like tons of mayo in it either, and the end result was a very good potato salad.....one I ate, and actually enjoyed!

About a year later, when I was working in the kitchen at my son's school, potato salad was on the menu.  "Ugh" I thought....I really didn't want to make potato salad for 200 kids and have to touch and smell all that mayonnaise!  I complained about it so much that my co-worker Patti said "Oh don't worry, I'll help you!"  She also added hard boiled eggs, so I guess my husband wasn't the only one.  So, as we were putting it all together (she had one pan of it and I had another) she started to sprinkle some dried dill onto hers.  "What are you doing???" I asked!  Apparently she makes hers with dill.....I had never heard of such a thing!  Without even trying it I decided I wouldn't eat it (stupid I was).  Then I challenged her to a contest - she could put dill in her pan and I'd keep my pan without it and we'd see whose got eaten up first.  I was baffled later to find that all of her's was gone, and I still had some left.  There was just enough along the side of her pan for me to scrape up a bite to try, and I was amazed at how much I liked it! The addition of the dill really gave it that extra something that set it apart from mine.....nice job Patti! 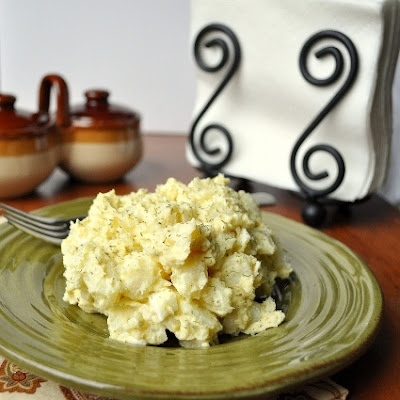 Here is my version of potato salad, using all the ingredients from my husband and from my co-worker Patti, but tweaked to my personal liking  - meaning as little mayo as possible :)  I now love potato salad (well, mine anyway) and it is a summer staple for us at all cookouts!  If you try this recipe, DO NOT LEAVE OUT THE DILL!  Trust me, it makes a difference and you will like it!!!!


Not Your Average Potato Salad

Peel potatoes and cut into cubes.  Boil until tender, and let cool completely.  Add the rest of the ingredients and stir until well combined.  Adjust any of the seasonings to your taste - may need a little more or less depending on your own preferences.  Serves 8-10.
Posted by Little B at Saturday, April 28, 2012
Email ThisBlogThis!Share to TwitterShare to FacebookShare to Pinterest