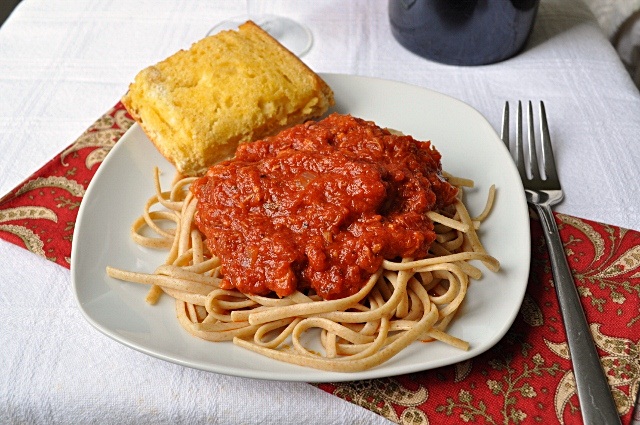 Linguine with tuna sauce was my most favorite thing to eat growing up.  Every time my mom would ask me what I wanted for dinner I would say "tuna sauce", every birthday when she'd ask me what I wanted for my special birthday dinner I would say "tuna sauce"...you get the idea.  Then I went off to college and didn't get home much after that, so the opportunity to have tuna sauce became few and far between.  Eventually I got married and moved to Vermont, and since I never learned how to make it myself, it's been 10+ years since I've had it.

For the last few years, every now and then I would tell my husband that I was going to make it, and he would laugh and make fun of me.  Since he's never had tuna sauce, for him the idea of a tomato sauce with tuna in it sounded disgusting.  "Why would anyone eat that?" he always asks me.  I don't know if a lot of people out there eat it, but I know I grew up on it.  My mother is only half Italian, but I know for sure there were other Italians in our town who ate it.  I would tell him this and again he would make fun of me and suggest I was making it up (this coming from a guy who likes banana & bologna sandwiches).  However, my son is right there with my husband and thinks tuna sauce sounds disgusting.

Since neither of them seemed interested in trying tuna sauce I never made it.....until now.  It was so delicious, just how I remembered it!  Ahhh, it brought back fond memories from years long gone.  However, dinner didn't go the way I had hoped - I really thought they would eat it and say "This is actually good".  Alas, that's not quite how it went.  Instead my husband laughed, and I mean harder than I've ever seen him laugh (with tears running down his face), all through dinner!  He ate it all though, and said it wasn't bad....while laughing.  Even my son was baffled by all the laughter - he kept asking what was so funny and wanted to know if my husband was on drugs.  He continued to laugh long after dinner was over, and as you know laughing can become infectious, so I began laughing too!  I think we completely freaked my son out :)

The next day (since I didn't want to evoke more fits of laughter) I asked them both what they thought of the tuna sauce.  My son said it was alright, and while it wasn't his favorite he'd eat it again.  My husband said it wasn't bad but would prefer I didn't make it again, BUT if I did he'd eat it.  I'm not really sure what to make of that answer, so if I ever make it again it won't be for a while!  Although, my mom always said "tuna sauce is an acquired taste", so I'm thinking maybe they need to be exposed to it several more times and maybe eventually they will like it as much as I do :)

Simmer on medium-low heat for about an hour, then turn down to low until you are ready to eat. You can keep it on low heat for a couple hours if you like – sometimes when I make sauce I will turn it off after it’s simmered on medium-low for an hour and let it come to room temp, then turn it back on low later for 1-2 hours.  Serve with linguine or whatever kind of pasta you prefer.
Posted by Little B at Thursday, April 26, 2012
Email ThisBlogThis!Share to TwitterShare to FacebookShare to Pinterest