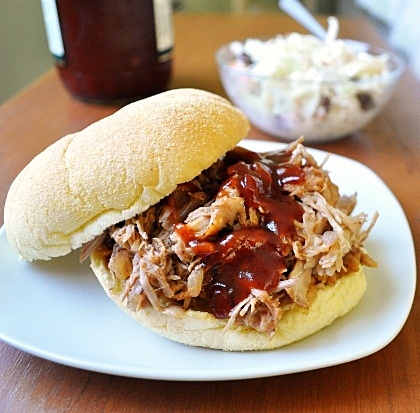 Mmmmm, pulled pork - YUM!  I don't know why, but I only seem to make it in the summer....I am going to have to put an end to that.  I have so many different recipes for pulled pork that I have collected over the years, so I think it's about time I actually make them.

I have been using the same recipe I got from a former co-worker, who used to enter pulled pork contests, for about 10 years now .  While it is a very good recipe, mine never did turn out quite like hers.  Now that it's getting warmer I decided to pull out another pulled pork recipe that I've been meaning to try.  It caught my attention because it uses Dr. Pepper, and I was curious to see what effect cooking the pork in Dr. Pepper would have on the overall taste.  Turns out the Dr. Pepper didn't seem to have any impact on the taste of the pork, instead it seemed that the purpose of it was to tenderize the meat.  The end result - the best batch of pulled pork I've made yet!  I look forward to trying other recipes in the future to see how it will compare to this recipe.....because as of right now, this is my new favorite pulled pork recipe!

Combine the cayenne pepper, dry mustard and brown sugar together in a small bowl and stir to combine.  Rub spice mix all over the pork and refrigerate overnight.

Place sliced onion in the bottom of your slow cooker. Add the pork on top, fat side down. Pour apple cider vinegar, Worcestershire sauce and Dr. Pepper over top. Cover and cook 2 hours on high and then 6 hours on low, or until meat is tender and pulls apart using two forks. Check meat every so often and turn about half way through.

Remove pork from slow cooker and place into a large bowl.  Using 2 forks pull pork apart. Discard any bones and excess fat. Once pork is completely pulled, add your desired amount of BBQ sauce of your choice and mix to combine – I added a little of the cooking liquid to keep it moist and just a touch of BBQ sauce. When we were ready to eat we added more BBQ sauce on top on the pork.
Posted by Little B at Saturday, May 05, 2012
Email ThisBlogThis!Share to TwitterShare to FacebookShare to Pinterest