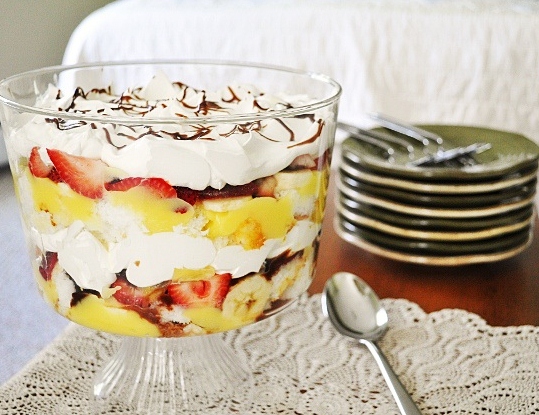 We had another beautiful summer weekend in Vermont this past weekend, and it was so nice to relax and just enjoy the weather - especially after the crazy day I had last week.  My husband was out of town and my son had slept over a friends house, so I was home alone last Thursday.  That meant it was my job to make sure the chickens had plenty of fresh water and food before I left for work in the morning.  Since it was going to be another day of temps in the 90's, and it was already 80 degrees at 6:30 in the morning, I decided to not get my work clothes on before heading out to the chicken coop.  Instead I threw on a pair of pajama shorts, a bra (that's right, I didn't bother putting a shirt on since no one was home) and mud boots and headed out to tend to the chickens.  As I opened the door to the coop to put the fresh water inside, one of the chickens flew out!  I then spend 15 minutes chasing her around the yard, all the while swatting at a horse fly that was buzzing around my head....I'm sure I was a quite a sight!  I couldn't get her, so I went and got our dog to see if we could work together to corner her but that didn't work either.  So, I decided to give up and hope that she'd still be alive when I got home later that day.

I ran in the house and threw on my work clothes.  I was pretty sweaty at this point so I decided not to bother blow drying my hair, especially because I was running late, so I just tied my hair up into a ponytail and gathered my stuff together.  As I stepped outside I glanced at my car in the driveway, and wouldn't you know it.....I had a flat tire!  UNBELIEVABLE!!!!!  I called my husband, and at this point I might have been slightly hysterical, and gave him the run down of my morning.  I could tell he was holding back the laughter as he told me to sit tight while he made some calls to see if he could get someone to give me a hand with the tire.  I of course contemplated changing it myself, but since I have never done it before I was a little leery of giving it a try.  In the end my husband saved the day and found someone to come over to put air in the tire, which made it possible for me to drive it down the road to our local mechanic so he could plug it for me.  After all that I only ended up being an hour and 15 minutes late for work....not too bad, all things considered!  So again, after that day, it was nice to relax this past weekend. ☺ 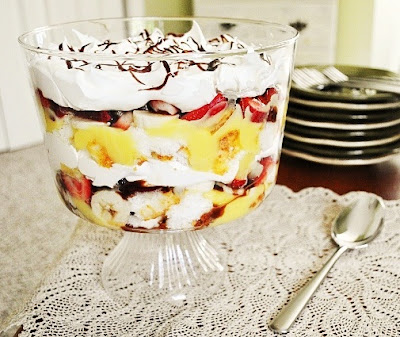 OK, so we should probably talk about this wonderful summer dessert.  This is another recipe I stole from my mother.  She made it for a family BBQ that we went to one summer, and it was a huge hit.  I made sure to get the recipe from her the next time I had to bring a dessert to a cookout I was going to, and again it was huge hit.  That's when I knew this recipe was a keeper!  It's so simple to put together, and it is surprisingly delicious - I'm not even into banana splits, and I love this dish.  Make this for your next gathering, and I promise people will be begging you for the recipe! 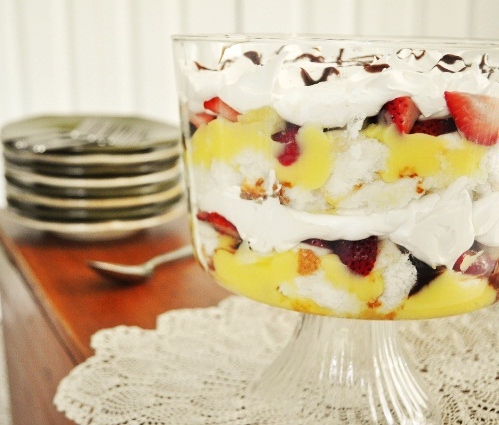 One Angel Food cake – feel free to make one from scratch, use a box mix, or buy a pre-made one
Vanilla Pudding – feel free to make a batch of homemade pudding, or make use 1 package of instant
3 large bananas, sliced
1 ½ cups sliced fresh strawberries
1 ½ - 2 cups chopped fresh pineapple (or a 16 oz can of crushed pineapple, drained)
¼ cup chocolate syrup
1 container of whipped topping, thawed (you could make whip cream from scratch but it wouldn’t hold up well after the dessert sets)
½ cup walnuts

When you are ready to assemble the dessert, cut the cake in half.  In a trifle dish (or large salad bowl) break up half of the cake into bite-size pieces.  Top the cake pieces with half of the pudding, half of the bananas half of the strawberries, half of the pineapple, half of the chocolate syrup, half of the whipped topping and half of the nuts.  Repeat all these steps with the remaining ingredients in the same order.  Chill until ready to serve.
Posted by Little B at Monday, June 25, 2012
Email ThisBlogThis!Share to TwitterShare to FacebookShare to Pinterest