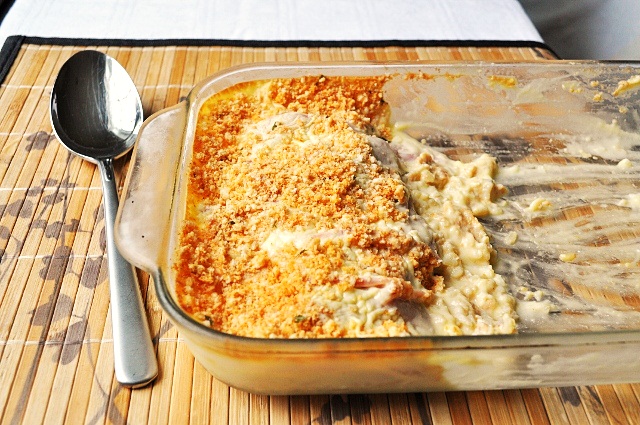 I love chicken.  I could eat it everyday....maybe even twice a day.  My husband on the other hand, not so much.  Don't get me wrong, he likes chicken well enough, but he'd prefer red meat.  Since eating red meat everyday isn't exactly healthy, I make him eat chicken at least once a week (don't worry, that doesn't mean we eat red meat the other 6 days).

Until recently, his favorite chicken dish was Chicken Cordon Bleu.  His new favorite chicken dish, in case you are interested, is Jalapeno Popper Stuffed Chicken (click here for the recipe).  Anyway, I've had this chicken cordon bleu casserole recipe on stand-by for a while now so I finally decided it was time to give it a try.

Thankfully, we all liked this dish.  I say "thankfully" because during the week I'd much rather throw all the ingredients into a casserole than to take the time to put it together the traditional way.  Don't get me wrong, the traditional chicken cordon bleu is worth the effort when you have the time.  The big surprise was that my husband told he preferred this casserole over the traditional version.  YES!  That makes this one a keeper ☺

Preheat oven to 350, and spray an 8 x 11 baking dish with cooking spray.  Spread the cooked rice over the bottom of the baking dish, and arrange chicken on top of rice.  Place the Swiss cheese on top of the chicken, then layer the slices of ham on top of the cheese.  Mix the soup together with the milk and  sour cream, and spread evenly over the ham.  In a separate bowl mix the melted butter with the bread crumbs and sprinkle it on top of the soup mixture.  Place in oven and bake for 30-35 or until hot and bubbly.
Posted by Little B at Monday, June 18, 2012
Email ThisBlogThis!Share to TwitterShare to FacebookShare to Pinterest